I plan to send out periodic newsletters about every 6 months to the constituents of Chesterfield County to give you an update of what I have been working on as your Matoaca supervisor. My first seven months on the Board of Supervisors has flown by. One of the biggest surprises has been the reactions I get when I answer my county phone number. I have received many calls since January and constituents are amazed that I actually answer my own phone! Imagine that, a supervisor that is always available to the citizens of Chesterfield. Please respond to this email with any comments or questions!

Board Chair Leslie Haley and I were recently interviewed on WRVA radio by John Reid and Jeff Katz regarding the reopening of schools in Chesterfield County. Please listen to our views on this very important issue.

As I promised while campaigning, I advertised to the community to fill the position of Planning Commissioner. I interviewed five great candidates and chose Tommy Owens for the position. I have the utmost confidence in his abilities. He has a true servant’s heart and is committed to you, the people of Chesterfield.

In January at our organizational meeting, I was elected by fellow board members to serve as Vice-Chair. I may be the first retired Chesterfield County Police Officer to be elected to the board. At the same meeting, the board adopted a letter supporting the Second Amendment. It was a unanimous decision by the board and two outgoing members.

There are several regional committees that require members of the Chesterfield Board of Supervisors to represent the people in our community.  I currently serve on Plan RVA (formerly Richmond Regional Planning District Commission), Crater Planning District Commission, and Richmond Regional Transportation Planning Organization (RRTPO). House Bill 1541 created the Central Virginia Transportation Authority (CVTA) and I will serve as Chesterfield's representative effective July 1st.

A new year brings with it a new budget. I met with each county department where I was briefed on management structure, operation, and the proposed budget. A series of public meetings on the budget were scheduled and I held the only in-person public budget meeting at the Clover Hill Library. It was well attended and many people from across Chesterfield voiced their opinions on what their budget priorities would be. Many proposed the need for increased funding in the school budget. Shortly after, the COVID-19 pandemic occurred and all in-person meetings were suspended. Community meetings on the budget were held virtually through Facebook live.

As you all are aware, COVID-19 dramatically affected our way of life but core services had to be maintained to provide services for our community. An opinion was issued by the State Attorney General which indicated that local governments could conduct virtual meetings to conduct official business. The General Assembly’s action clarifies the prior authority to meet electronically and expressly authorizes consideration of normal agenda items, including land use cases. Questions arose as to whether localities should put land-use cases on hold during the COVID-19 crisis. The new legislation clarifies and makes it abundantly clear that local public bodies can meet virtually to consider land use cases if they choose to exercise the authority granted by the General Assembly.  Chesterfield decided to adopt an emergency ordinance authorizing virtual meetings and changed in how the information would be gathered and presented to the board relating to public comments. Comments were collected by online submission, voicemail, and phone conversations that were transcribed. This information became part of the permanent record of the board meetings. I read every comment prior to the meetings and this change resulted in greater input on development cases than ever before.

I applaud our community for how we came together to help each other in so many ways during this very stressful time. Volunteers worked at food banks and at the schools to provide meals for our children. Donations were made each week to restock the food banks to help the less fortunate in our community.

I have received emails and calls asking if the Chesterfield Board of Supervisors are going to defund the police. As a former Sergeant with the Chesterfield County Police Department, I never want to vote to defund the police. In extreme cases where a huge budget deficit could occur, the last cut made would be public safety. I am happy to announce that for the first time in thirty-plus years the police department will be fully staffed at almost 550 police officers. Although that is the current authorized staffing, I believe the department is still understaffed.

The Sheriff's Department is primarily funded by the State Compensation Board and supplemented by the county. I will not support a vote to cut funds to the Sheriff's department.

There is an upcoming special session of the General Assembly in August and the Democrats are introducing legislation regarding the police that would place all our communities at risk of higher crime.

Click on the link for information on their proposals. Virginia Legislative Black Caucus Outlines Policing Reforms for Special Session

You only need to watch the news each night to see the attacks on law enforcement. These proposals will cripple police departments and compromise public safety. One measure they will consider is legislation that would restrict qualified immunity for law enforcement  The rationale behind qualified immunity for police officers is two-fold. First, it permits officers to perform their duties without fear of constantly defending themselves against insubstantial claims for damages. Second, it allows the public to recover damages when an officer unreasonably violated a plaintiff’s constitutional or federal legal rights. Qualified immunity is designed to protect all but the plainly incompetent or those who knowingly violate the law.

It is hard enough now to hire young people to work as law enforcement officers without these additional deterrents. The Virginia Fraternal Order of Police has issued a position statement to the General Assembly on the proposals and will be speaking against them.

I am concerned with the troubling events unfolding across our great nation. Please know that I have pledged my entire adult life to protect the people of Chesterfield County and I will continue to do so. I am blessed to have been given this opportunity.

In case you missed it, Leanne and I were married on Valentine’s day after we were engaged election night last November. I plan to have a Saint Patrick’s themed fundraiser March 2021. This will be a fun, entertaining event for the whole family.

Chesterfield County Board of Supervisors 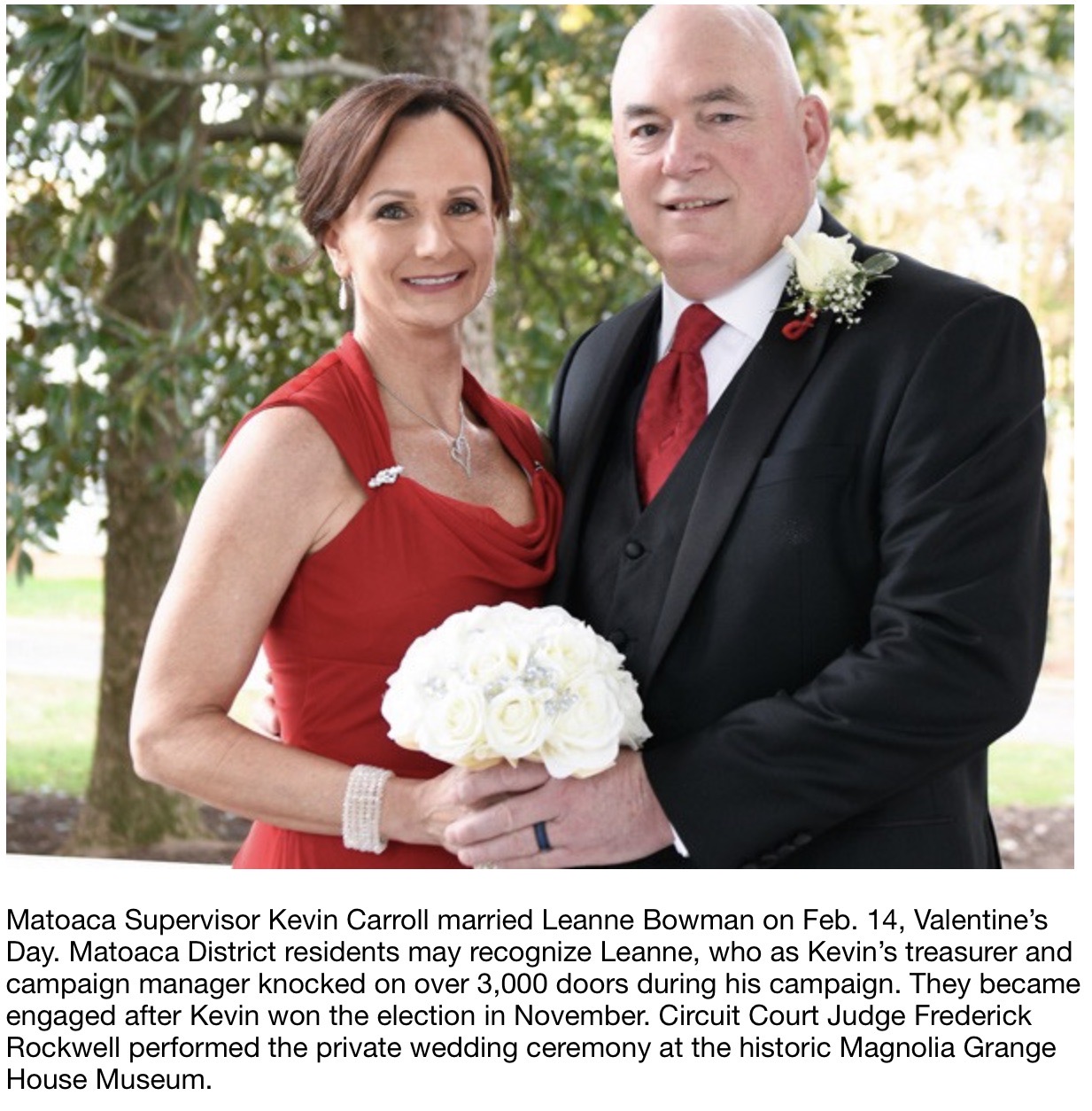